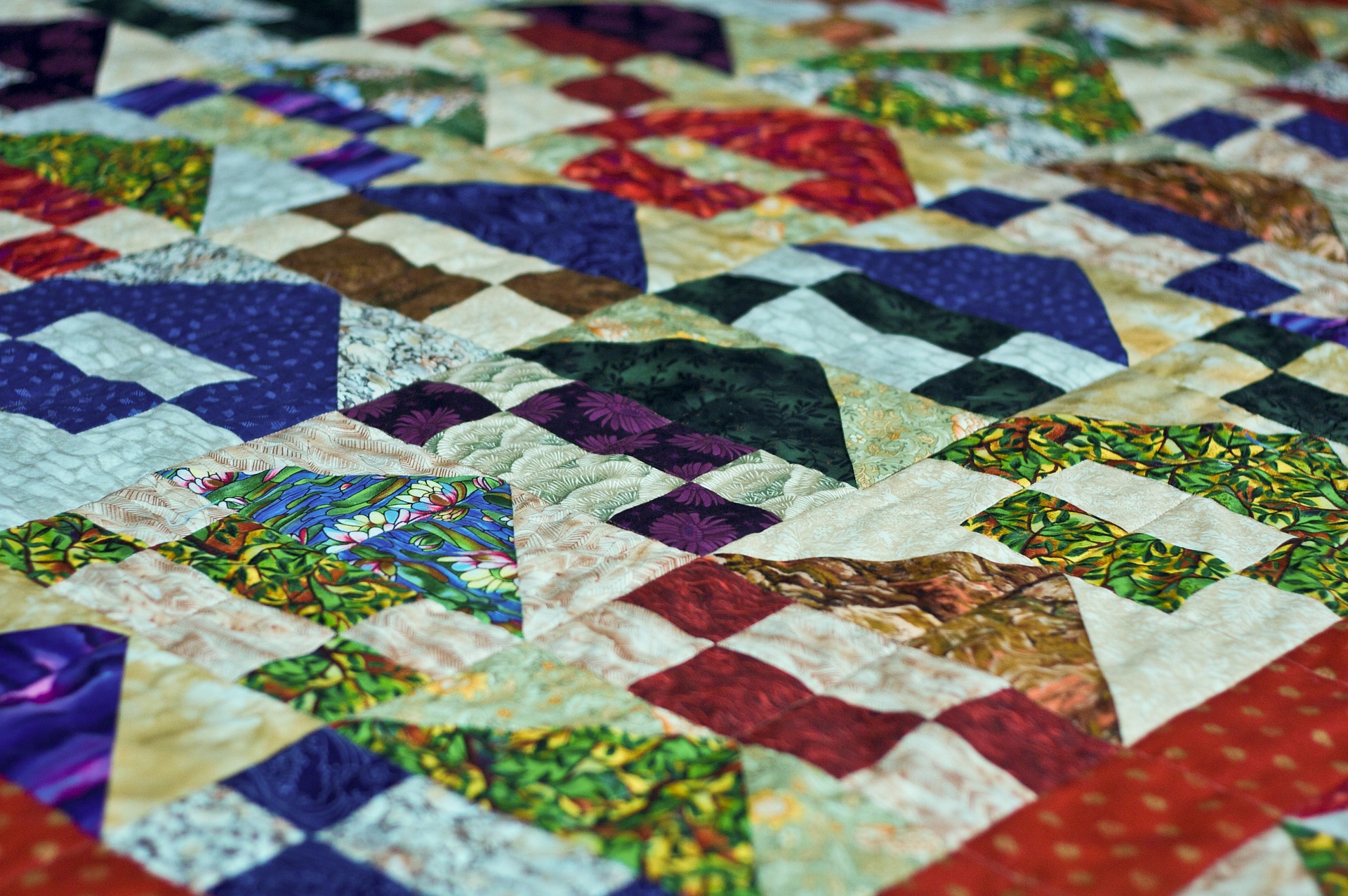 â€œThanks for giving the quilting club a chance, Lisa.â€

â€œDon’t mention it, mom. It’s just one night.â€ She glanced over at the bright smile on her mother’s face. â€œJust don’t get your hopes up. I know this club was started by your grandma and has been going nonstop for like fifty years now, but I just can’t get in to the housewife-crafty thing. I don’t even know the first thing about quilting.â€

â€œThe girls will teach you everything you need to know tonight. You’ll love it.â€

â€œThe girls?â€ Lisa questioned. â€œMom, you’re the youngest one. Hell, Millie Hendricks was probably a founding member.â€ Every memory she had of Mrs. Hendricks was of her brandishing her cane as a weapon accompanied by a threat. Even from her earliest childhood memories, Mrs. Hendricks had been the belligerent old lady all the kids loved to goad.

Her mother stopped the car at the light and chuckled. â€œNo, but her mother was. And you’ll be the first girl of your generation to join.â€ She sounded so proud.

â€œDon’t get your hopes up.â€ She knew she wasn’t going to like it, but she didn’t know how to say no to her mother when it would make her so happy. It will only last a few hours and then after tonight she could say that she had given it her best, but just didn’t enjoy it and get on with her life.

â€œI didn’t think I’d like it at first either, but I went to make my mom happy just like you’re doing now.â€

â€œThat was different then, mom. Modern women don’t quilt.â€ Lisa thought of her mother coming home from these meetings when Lisa was young. She would be happy and refreshed and sometimes she’d even sing and twirl Lisa or her older sister Jenny around the room dancing and giggling.

â€œIt was 1979 when I went to my first club meeting. I was a feminist and told my mother pretty much the same thing.â€

Lisa had a hard time picturing her mom as a feminist, not that her mom was submissive, but something didn’t seem right about her mom being so independent.

â€œShe told me of how she felt when she first went.â€

â€œOkay, here it is. I had just married your father when I was first invited., Jenny wasn’t born for another year and a half and I was young with fresh ideas of feminism and I didn’t think quilting was what liberated women did, but I went to appease my mom and I got there and it was totally different from what I expected. Now here I am still going every week.â€

â€œPart of it is the company. You’ll love the gir…ladies. Actually, you know pretty near all of them.â€

â€œSo why didn’t you bring Jenny instead of me? She’s older.â€ Jenny had called her earlier that day to tease her about getting conned into a night of doing â€œgranny workâ€ and hearing old ladies complain about their arthritis and bowel movements. She had asked Jenny how she had gotten out of going all these years and was surprised to hear that she had never been asked. Jenny had sounded a bit bitter after that.

â€œNeither is Marge Hinkelman.â€ Lisa thought of the thrice divorced Marge and wondered what secrets she had learned from her marriages that a single woman wouldn’t know.

â€œAh, but she’s divorced. She knows what it’s like to be married.â€

â€œWhat do marriage and quilting have to do with each other?â€

â€œYou’ll see when you get there.â€

â€œIt’s hard to explain without it sounding boring.â€

â€œMaybe because it is boring,â€ Lisa told her. â€œAnd if it is I don’t think this is right for me either.â€

â€œNo, it won’t be boring and it’s prefect for you.â€ She slowed the car to a stop behind a recent model Toyota just outside of a two story Victorian house. â€œAnd here we are.â€

â€œJust don’t get your hopes up, mom,â€ Lisa reiterated as she unfastened her safety belt. â€œI probably won’t come back after tonight. Quilting is a little old fashioned. The club will probably die off after your generation.â€

They got out of the car and Lisa grabbed her mom’s quilting bag as her mom grabbedÂ  the pan of her famous mini-quiche.

â€œThis is a little heavier than I thought quilting supplies would be,â€ Lisa commented.

They walked up to the door and Lisa freed a hand to knock.

The door opened a little bit later. The woman smiled warmly. â€œBetty, you brought Lisa.â€ She took the bag from Lisa and then hugged her. â€œI didn’t think you’d come. You’ll really love the club. Come in, Come in.â€

â€œThanks Mrs. Landon,â€ Lisa said politely as she followed her mother into the house.

Betty led the way into the kitchen and set the pan down next to a mixing bowl full to the brim with butter mints.

â€œEver since Joe went to college,â€ Cindy told her. â€œHarold let me convert his room into a sewing room. I don’t think Harold’s been in since I renovated. Anyways, Harold goes bowling every Wednesday, so us girls can be as noisy as we want.â€ She winked conspiratorially, but Lisa didn’t quite follow.

â€œYou quilters must be a rowdy bunch,â€ she commented as she watched her mother take the lid off of the mini-quiche and then carefully remove the top layer complete with it’s waxed paper base and throw it directly into the garbage can.

â€œMom, you just threw away your quiche. You spent hours making those.â€

â€œNo, I didn’t, I bought them at the grocery store. They’re truly horrible.â€ She tilted the pan a bit. â€œNow the brownies here are simply divine.â€

â€œWhy don’t we go to the sewing room and get started. You’re the last ones to arrive.â€

Cindy led the way down a short hall. â€œThe bedroom on the main floor was ideal,â€ she told Lisa. â€œSome of the older girls have trouble with stairs.â€

As they walked down the hall, Lisa got the faint smell of cigar smoke. â€œIs Harold home tonight?â€

She stopped in front of a closed doorâ€”laughter could be heard on the other sideâ€”and put her hand on the knob. Before opening the door she turned and faced Lisa. Her face went serious and she said, â€œNow just remember that what happens in the quilting club stays in the quilting club.â€

Lisa stifled a chuckle as she realized Cindy was serious and said, â€œOf course.â€

Cindy opened the door and let them in.

â€œHere. Here,â€ Connie Preston chimed in, her glass of brandy raised. Lisa remembered Sue Preston getting grounded for a month their sophomore year of high school after her mother, Connie, found a joint in her room.

â€œMakes you forget all about it, at least,â€ Lucy Mancini, the second oldest member, piped in.

â€œSpecial brownies?â€ Lisa whispered as she took everything in. A small group of women, many of which had grandchildren Lisa used to babysit, sat around a poker table, some held cigars and Millie held a suspicious hand rolled cigarette. She watched Mrs. French take a long drag from her cigar and remembered when the older woman had refused to speak to her twenty-year-old granddaughter once she had found out the girl smoked and kept to it for over a year until the guilt made Claudia quit.

Maureen Tisdale, the loan officer at the local First National branch had her laptop in front of her. â€œI have a buy it now of $100 on this green number out of Tennessee. Homemade and gaudy, just the way we like it.â€

â€œGet it and put that thing away. We’ve important business to attend to,â€ Millie told her.

Betty leaned over and whispered to her daughter, â€œMo’s family have always been in charge of actually making the quilts. Her grandmother and mother used to sit apart from the rest of us and actually quilt. I think they’re the only ones who ever knew how. Mo here just buys homemade quilts off ebay once every few months and we donate them to charity.â€

She put her brownies on the sewing table that was along one wallâ€”the sewing machine still coveredâ€”and then took her quilting bag from Cindy. She pulled out a couple bottles of scotch and knelt down next to the table. She opened a supply cupboard, pulled out the skeins of yarn and took out a nearly empty bottle and replaced it with one of the two full bottles and then put the yarn back.

She grabbed two glasses, dumped some ice in them from a bucket, poured some scotch in each, handed one to Lisa and said, â€œDeal us in, Maude. I brought enough to cover my girl here.â€

Lisa took a seat across from her mother and picked up her cards. â€œI’m going to need some quilting supplies, aren’t I?â€